Game developers and mobile app publishers, Cloud M1 LLC, have launched a colorful and fun new digital platform game on crowdfunding platform, Kickstarter, which has already featured the campaign in their “Projects We Love” and “Project of the Day” sections. Inspired by clowns and juggling performers, Ayo The Clown will appeal to younger children as well as older or more hardcore gamers. Youngsters will love the adorable cartoon clown character and the platform design, which resembles originals like Donkey Kong and Super Mario World, is sure to appeal to fans of the addictive platform gaming genre of the 80s and 90s. 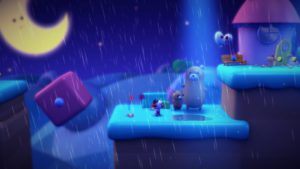 Most of the work has been completed on Ayo The Clown and the game is now at the stage where a playable demo is available to download to PC. Gamers can get a good idea of what it’s like to take Ayo through the various levels of his world where they might need to jump shark-infested waters, swing by vines over snapping gators in swamps, or dodge threatening Japanese Sumos made from rock.

Backers are now needed to raise funds so the talented team at Cloud M1 LLC can provide the finishing touches to the story and develop more levels. They want to make the game available for general release at the end of 2017 or early 2018. The creators plan to make Ayo The Clown available initially for PC, with plans to launch on consoles and mobile.

“Ayo the Clown is a game that goes back to a time when games were simply for fun. With colorful graphics, memorable characters and dynamic level design, Ayo challenges players at every turn,” says Xiu Liang, Game Director at Cloud M1 LLC. “With this game, we hope to create something everyone can enjoy.”

A timeless genre, older platform-type gamers will feel comfortably familiar with the format and may even feel transported back to their childhood. Fans of more recent games, such as the Legend of Zelda series, will also recognize the structure, whereby the character’s full potential is not realized at the outset; rather, the character grows and develops more skills as the game progresses.

The object of this vibrant, imaginative game is to help Ayo, a cute, juggling clown, find his missing dog, his best friend Bo. Ayo travels through eight immersive game worlds collecting comic book pages in each level to solve the mystery behind Bo’s disappearance. Obstacles include dodging missiles, falling parachutes, driving rain, pitch black night, and streams of fire as Ayo’s whoops of delight are heard against the upbeat soundtrack that was composed especially for the game.

On a deeper level, the game captures the emotions of loyalty, friendship, and dedication as Ayo acquires collectibles and rewards, solves puzzles and quests, rides in tanks and helicopters, and collects lives on his adventures. Gamers can also collect accessories to change Ayo’s appearance.

For $19, backers on Kickstarter will receive a package of benefits to include the following: a digital version of the game and a cape for Ayo, a PDF copy of the manual, a digital download of Ayo as a paper model, access to beta testing and a development poll, their name in the game’s credits, and access to developer blogs and forum.

Can India be the Next AI Superpower?

Charlie Murder and The Dishwasher: Vampire Smile on Steam May 12th!

Chicken Bomb Out Now on Steam