Indiegala, a small local development and publication company that gave birth to Die Young, kidnaps us and makes us wake up at the bottom of a well on an island with typically Mediterranean colours, near Turkey. As Daphne, a girl with a passion for climbing and the good life, we will have to get out of a situation that has gotten out of hand for her and her group of friends, who went to the island in search of a holiday with strong emotions: pity that it was the strong emotions that fell on them with unprecedented ferocity.

This Die Young is not a classic survival, since basic needs such as hunger and thirst are easy to satisfy since water and food abound and the crafting is not particularly articulated, although in its simplicity it is suitable for the context. It’s not even a combat-based FPS, since the head-on collision is a sketchy dynamic to be trusted only after the prayers have not affected. After having tried it thoroughly, I think the most suitable definition is “escape simulator”, being careful not to get confused with the first vowel. We start again from the moment we leave the well and the adventure begins. What we are faced with is a mysterious island – with an area of ​​12 square kilometres – where flora and fauna are scattered almost everywhere in a paradisiacal environment. The surreal peace that is breathed through the bucolic settings is destined to be soon broken because disturbing and disturbing figures moved by obscure motivations and faulty synapses are out there waiting for a false step from their prey. The target of these fanatics and their numerous guard hounds is us, in case there is still any doubt. The game is based on a simple idea, namely the need to escape from a dangerous situation without being able to rely on who knows what tools or skills. The protagonist is agile but not invincible, does not have devastating weapons but only those that can be found while exploring or building with crafting and, among the many threats, she will meet hooded thugs armed with a scythe who can send her to the other world with a couple of swipes. The only way to avoid the pebbled vine reapers is to sneak through the tall grass, hide from their sight and climb. This feature seems to be taken directly from Dying Light’s parkour and, if conceptually it works similarly, in practice the comparison doesn’t hold up.

The combat system is woody, it demands precision in shots, parries and dodges but does not contemplate it as it should, proving to be inferior in terms of feeling compared to the less noble – but wiser – art of escape desperate; the approach that never disappoints and the one on which the game is based in stealth, a more cautious solution that fits perfectly with the sense of restlessness that pervades exploration. The tension never loosens its grip on the player, except when he finds a refuge in which to rest or take advantage of fast travel, creating a constant sense of anguish resulting from the adrenaline-pumping feeling of being in constant danger. The plot, although quite inflated and without localization in Italian, manages to hold up the narrative shack, helped a lot by the strength of the game, that is a pleasant and immersive exploration, corroborated by a good variety of threats, by a rhythm that is now calm frenetic fomented by sudden changes in the soundtrack and by well-chosen settings, all dense with a tense atmosphere that pushes to check everywhere to see the enemies in advance. HAVE YOU EATEN TOO MUCH, UE4? BURP!

Graphically, the painting painted by Indiegala appears valuable when viewed from afar and imperfect on closer inspection. Insufficient optimization, on the other hand, makes the UE4 seem unexpectedly burdened – if not in trouble – and the recommended system requirements are not low. Sporadic crashes, some bugs and exhausting uploads (a generous couple of timed minutes), however, are the real technical flaws that affect the experience and that must be fixed quickly. It seems the developers are hard at work fixing the problems and this bodes well. Another drawback concerns the AI ​​of the enemies, perhaps a little too flat, but an understandable lack perhaps also linked to the limited resources of the developers. Die Young is an independent project ambitious that deserves to be kept an eye on because he is capable of plunging vehemently into terrifying hunting sessions where the prey is the player. To instil fear, the idea on which the game is based and the passion with which it was developed is enough. The gameplay is affected a little by some mechanics only hinted at or not very refined because a more accurate realization of certain elements would have helped to offer a better and more complete experience; the most annoying burdens, however, are the technical ones and it is they who weigh the most on the current quality of the title. 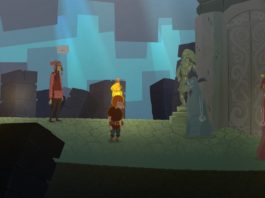