Built on the AM4 socket, the new Ryzen Pro 4000 processors are built to be the best using the latest cutting-edge technology AMD has to offer. The new AM4 based desktop APU’s are based on the 8-core 7 nm “Renoir” chipset, built on the groundbreaking Zen 2 core architecture with innovative 7nm process technology and optimized for high performance Radeon™ graphics in an SOC design.

BIOSTAR is ready to roll out BIOS updates for their AM4 based 500 series motherboards to match AMD’s release so BIOSTAR consumers can easily upgrade their existing builds to the latest AMD processors.

Designed to be the best in business, the RACING B550GTA and the RACING B550GTQ are built with BIOSTAR’s aggressive design language carried down from their RACING family motherboards engineered with bleeding-edge technology to support the best hardware in the market. BIOSTAR RACING B550 series motherboards are ready to leave all competition in the dust with the all new Ryzen Pro 4000 processors.

Similarly, BIOSTAR’s X570 series is getting the new BIOS update as well making them readily available for those shiny new processor updates. 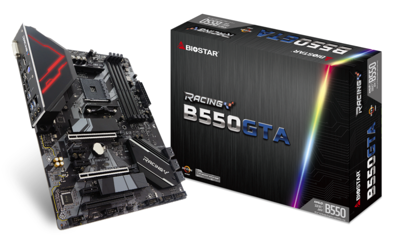 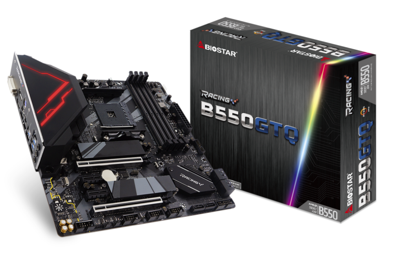 Built to run the latest and greatest AMD Ryzen Processors, BIOSTAR’s RACING B550GTA and RACING B550GTQ motherboards are designed to be the best in gaming and business, flawlessly engineered with design elements carried down from their RACING family motherboards with bleeding-edge technology to support the best hardware in the market.

The RACING B550GTA motherboard comes in an ATX form factor suitable for consumers looking to build a full-blown gaming rig that can take advantage of the additional expansion slots and connectivity that comes with the ATX architecture, while the RACING B550GTQ motherboard is built around the Micro-ATX form factor for builds that need the same level of technology and power as its ATX counterpart but take less real estate from a PC case.

Both motherboards are well equipped with the latest technology like the new PCIe 4.0 slots which provide a 16GT/s bit transfer rate with 2x times bandwidth than the old PCIe 3.0 while maintaining backward compatibility as well. RACING B550GTA and RACING B550GTQ motherboards are also equipped with PCIe M.2 4.0 which deliver lower latency with the highest bandwidth 64Gb/s and it’s 2 times faster than PCIe M.2 3.0.

Geared towards the business and casual users, the new BIOSTAR B550MH motherboard is designed to be efficient and reliable built with the latest technology to be the best in the market with a new stylish PCB design.

The B550MH motherboard supports up to 64Gb of RAM across 2DIMMs with the capability of reaching 4400+OC speeds and technologies like PCIe 4.0 that supports 16GT/s bit data transfer rates which is 2 times faster than PCIe 3.0 with backward compatibility, as well as PCIe M.2 4.0 which delivers lower latency on a higher bandwidth of 64Gb/s which is 2x faster than the old PCIe M.2 3.0 making the new BIOSTAR B550MH motherboard a great choice for many applications.

In conclusion, consumers can rest assured that their BIOSTAR AM4 motherboards are well supported for any processor upgrade without a hassle with easy to install BIOS updates that will improve system stability in a cost-efficient way. BIOSTAR always aims to provide unparalleled aftersale support for their products as an industry’s leading brand.

Users can go to the download page of their motherboard’s product page and download the latest BIOS version as listed below with a list of supporting processors.

The Surge 2: Experience the beginning of the end for Humanity...

BAFL – Brakes Are For Losers Puts the Pedal to the...

The World of Darkness Comes to VR for the First Time...

Enter the Labyrinth for the Final Time on the Nintendo 3D...

Zouks target hattrick of the win in their first late game...